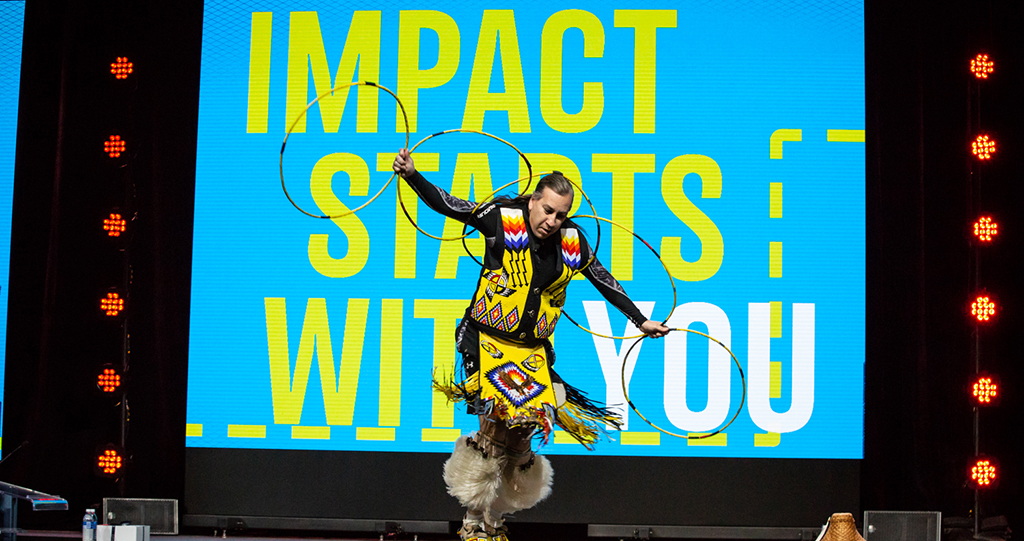 A look back at the 2018 HR Conference + Tradeshow: Keeping People-First in a Changing World

If one wisdom resonated above all others for the 1,000 plus crowd at Vancouver Convention Centre West from May 1-2, 2018, it was most fittingly the impact of people. This unifying principle provided the foundation and theme for the two day Conference + Tradeshow.

From a hoop-wielding Indigenous welcome to their ancestral land to the firsthand stories of ordinary people and extraordinary leaders, the conference had something for everyone in 2018 – and this year’s conference promises to be even better. The 2018 HR Conference included keynote presenters, Dr. Brynn Winegard, Peter Mansbridge, Steven Cadigan and David Usher, as well as more than 35+ breakout presentations, a 100 vendor tradeshow, professional awards and more!

People-first thinking – as HR professionals promote daily – is a timeless concept and one which defines the greater potential of our species: past, present, future.  And while it’s a well known fact  amongst those who attended the 2018 HR Conference + Tradeshow, it is one accompanied by changing challenges and opportunities for business leaders of every stripe—and HR professionals in particular.

The importance of people first thinking was driven home by the opening keynote presenter, neuro researcher, Dr. Brynn Winegard. She also highlighted how challenging such thinking is in an era of  technological distractions.

Similarly, retired CBC anchor Peter Mansbridge made his name via people-first thinking, discovering some of his most memorable stories in random encounters with everyday Canadians. In fact,  he himself was “discovered” while working a small airport’s boarding microphone. The “kid” had a great voice, thought one of the boarding passengers, and he had a night slot to fill at the station – and the rest is Canadian broadcasting history.

Finding that talent fit was more challenging for second day keynote kick off presenter Steven Cadigan, ex-CHRO of LinkedIn. Early on in life, he found himself exploding notions of culture to succeed in a tech market, where exorbitant offers by talent competitors were the order of the day. His subsequent success resides in helping other companies break through their own culture talk to get to what makes them tick. Cadigan drove home the points: no two culture recipes are the same—regardless of the popular tropes that emerge in every discussion of culture—and every successful culture recognizes change as an unchanging factor and their employees as agents of such change.

At no other point during the conference were agents of change recognized and celebrated than during lunch on day two at the Annual Awards Celebration Luncheon, hosted this year by the Honourable Lieutenant Governor Janet Austin in her first public appearance since taking her Oath of Office. Austin was on stage and on hand to congratulate the winners and finalists of the 2018 Rising Star and HR Professional of the Year awards – along with their family and friends afterwards. She was also joined CPHR BC & Yukon CEO and President Anthony Ariganello in recognizing seven of the profession’s brightest lights with Fellow CPHR status for their outstanding and ongoing contributions.

The conference was closed out by the final keynote presenter, Juno award-winning singer and author David Usher. Usher rolled up his proverbial sleeves and hit a fewer higher notes with a musically-accompanied, critical discussion of the creative process and its importance to us both within our lives and, most integrally for the audience gathered, in our workplaces.

For Usher, who is also founder of ReImagine AI, that creativity is the pulse of individuals, organizations and bands alike—a point sonically illustrated by bringing an audience member up to hold a device that to set the beat for the next song via their heart beat. After a pulse pounding start, the rhythm slowed and a uniquely human moment emerged—compliments of an emerging technology and some seriously human talent.

Here are the highlights from last year. We hope to see you all again in 2019!

Join the momentum as together we can make an impact, achieve our goals and become part of a bigger movement.

This years conference will be on April 2nd and 3rd, and includes five keynote speakers, 40+ breakout presentations, loads of networking opportunities and of course FUN!

Mel Robbins
In her globally acclaimed TEDx talk with over 12 million views, award-winning and bestselling author, Mel Robbins has wowed the world with the science backed secret to change: The 5 Second Rule. More info…

Duncan Wardle
Leaning on 25 years with Disney, Duncan Wardle is now on a mission to prove that everyone is creative. He will demonstrate a series of creative behaviors and innovation tools that deliver revolutionary thinking and substantial business results. More info…

Hayley Wickenheiser
Seven World Championships, Five Olympic Medals – Hayley Wickenheiser is a titan of sport and a leader both on and off the ice. She is considered by many to be the best woman to ever play hockey. More Info…

Steve Gilliland
A member of the Speaker Hall of Fame, Steve Gilliland is one of the most in-demand and top-rated speakers in the world. In his eye-opening session, he shows how to avoid being robbed of the opportunity to preform at peak performance because of negativity. More info…