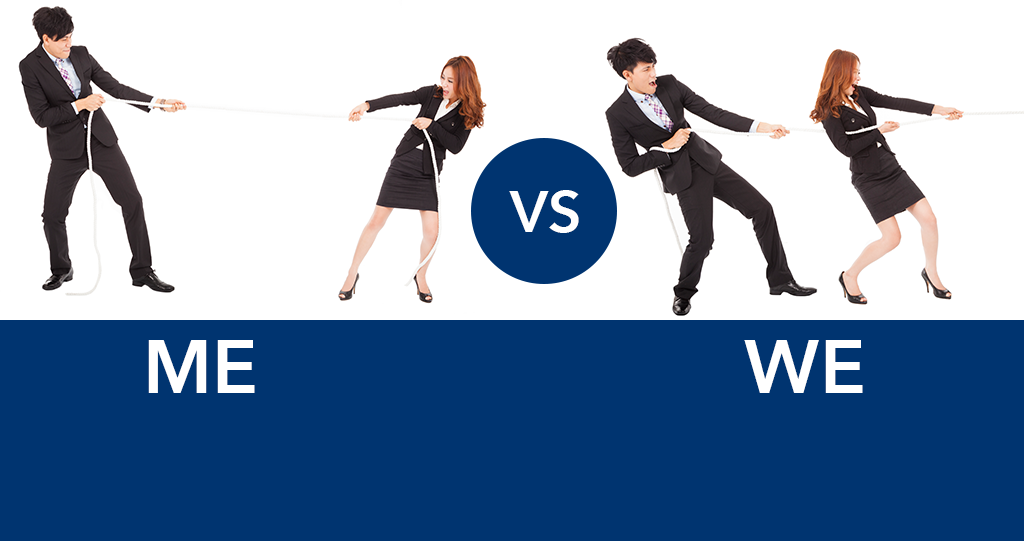 From Competition to Co-opetition: Me VS We

We have all heard the terms “win-lose “and “win-win” used millions of times — and we all agree that win-win is better.

A classic example is two people arguing over an orange and cutting it in half is not of interest to either party. They both want the whole orange. Roger Fisher and William Ury’s classic book, Getting to Yes, describes interest-based negotiation as discovering the true desire underlying the discussion. In the case of the orange, one of them wants actually wants the peel and the other wants the pulp — and this seems like an ideal solution.

But what if we take this one step further?

Suppose one of the people owned some land in Florida and the other person had experience in managing orchards?

They could conceivably discuss how to work together to grow orange trees so that they could both make a lot of money over and above their individual desires for an orange.

This is an example of competitors becoming collaborators, sometimes referred to as co-opetition, and there are already many examples in the business world. Think of Amazon, whose Kindle reading tablet competed with the iPad, before partnering with Apple to put a Kindle e-book application directly on the iPad.

Both Amazon and Apple gained tremendously from this strategy. Similarly, Sony and Samsung, very strong competitors, partnered to jointly develop technology that vastly improved the potential for LCD television products.

These are examples of how a favourable arrangement can be “negotiated.” Of course, there are many sources of information on how to negotiate, but these are all written in a business context. Can these techniques be transferred to an interpersonal situation? The answer is a definite “yes” because people are negotiating among themselves all the time whether they realize it or not.

One of the most common questions that drives behaviour is the well-known “ What’s In It For Me?” (WIIFM). People are people and we want the best outcome for ourselves. This is only natural.

This question drives our behaviour at a fundamental level when we negotiate even if we throw around the term “win-win” trying to convince everybody around us that we really want everybody to win — it doesn’t fly, most of the time.

Why not? Because a radical change in thinking is needed.

The team at the University of Tennessee Center for Executive Education led by Kate Vitasek developed the vested approach to business negotiation and one of their noteworthy books is Getting to WE: Negotiating Agreements For Highly Collaborative Relationships.

The key word here is “relationships.”

Relationships change the question from WIIFM to WIIFWe “What’s In It For WE?” This fundamentally shifts the focus from the singular goal of a particular deal to the shared potential of creating a powerful relationship.

Again though, Getting to We is written in a business context, so how do we translate that to interpersonal communication? If we look at the basic rules described by Vitasek, we see that they resonate from both the personal and professional perspectives.

Building Trust With Each Other

Vitasek says that a collaborative or co-opetitive relationship is absolutely and completely dependent on trust. No surprise here, since many previous PeopleTalk articles have all pointed to trust as the prime prerequisite for everything from retention to innovation. However, trust takes time to build, and perhaps this where the real power of creating a culture that empowers play comes in — breaking down the fabricated walls in a social setting to allow for fun and the fibres of trust to take root.

More fundamentally, given the levels of disruption and the fears generated throughout traditional workforces as a result, play provides not only an ice-breaker, but an essential bonding and stress release.

While it is almost a contradiction of terms to try to define what play is, an article in Psychological Science entitled Playing Up The Benefits Of Play At Work says that play, “involves an enthusiastic and in-the-moment attitude or approach.”

This obviously links us to the idea of improvisation, and all of its benefits in the workplace as described in the PeopleTalk Fall 2015 article, The Importance Of Improvisation? (Innovation And All That Jazz). Think of a group of jazz musicians gathering for the first time, each shining during improvisational solo bits, holding the backbeat for another to take the spotlight and revelling in the moments when they all lean in together. The sheet music is as absent as the trust is implicit—and the magical result we call “playing” jazz.

As some companies have already discovered, that “magic” of play can have a powerful impact on the front door and the bottom line. However, in order to move from a traditional, transactional approach to a more collaborative one, we need to help people shift from feeling threatened in some way by their boss, manager, colleagues, customers and/or suppliers to feeling confident and comfortable. This requires teaching everybody the importance of communicating their intent firmly in mind—one of the key element of trust. This is because the biggest source of fear in the workplace is actually not artificial intelligence, but uncertainty about other peoples’ agendas.

Are You Ready to Play?

By providing opportunities for spontaneous fun, humour, and creativity (beyond traditional brainstorming stuff) and showing that mistakes and “silly stuff” are welcome, leaders will over time create a culture where people feel freer to express themselves in whatever way they want.

This will in turn encourage far more interesting inter-departmental discussions than yielded by the previous “us vs. them” paradigm; after all, the number of “thems” has only ever grown with this mindset.

Who knows, driven by the spirit of co-opetition, you might find a greater orchard of your own—instead of getting pulped by the competition.