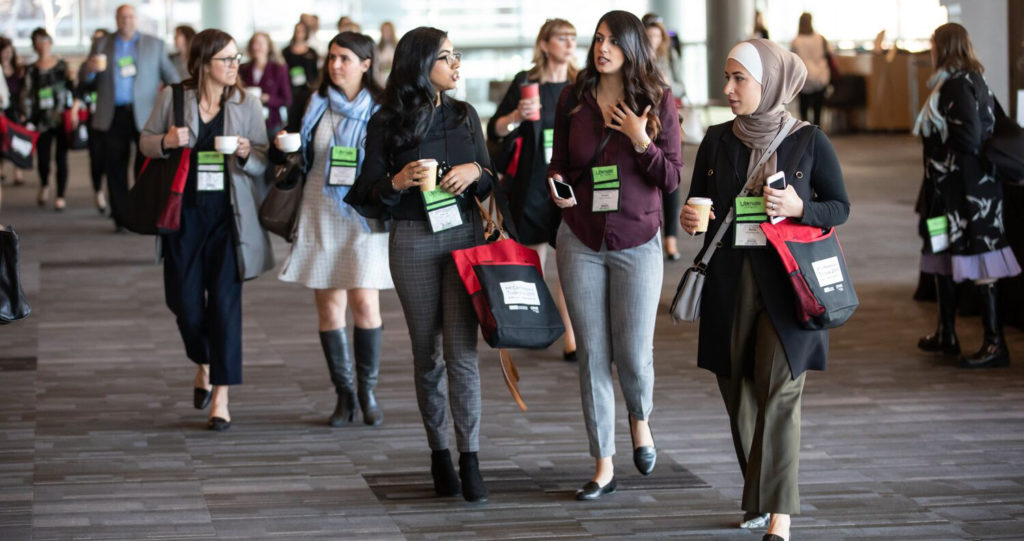 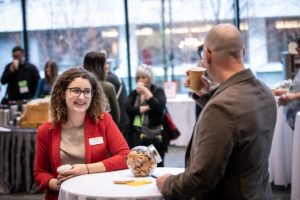 On social media, CPHR BC & Yukon had more than 55,000 impressions and close to 1,500 engagements/interactions with its audience over the two days.

Mel Robbins kicked off the HR Conference with a bang, reminding everyone that changing their daily habits and improving their lives is as simple as counting 5-4-3-2-1. She reminded us all that change, whether it be an organization or yourself, is always difficult because we all innately like staying in a world of repetition where we feel safe.

In order to break the auto-pilot pattern and improve your life or organization we need to make changes to how we are doing things. One of the easiest ways to welcome change is to jump into it, which is where the 5-Second Rule comes in.

The moment you begin to second guess yourself, count 5-4-3-2-1 and move before your mind stops you.  By counting down you interrupt the habit loop in your brain, which leads to breaking the habits that no longer serve you, thus letting the thinking part of your brain decide what to do.

Robbins also passed along some advice to leaders and perspective leaders in the audience:

. @melrobbins “When I walk into a meeting, my job isn’t to talk, it’s to listen and make sure everyone has an opportunity to sure their thoughts.” #hrconf2019 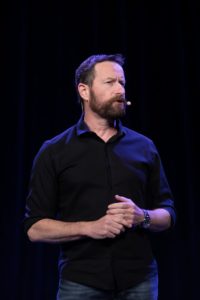 Up next, Duncan Wardle hit the stage with energy and enthusiasm, reminding us all that we were once creative. And it certainly didn’t take him long to do it.

To set the tone, Wardle had everyone in the room break up into groups of three – one person was an expert in a hilariously rare and imaginative subject, such as the ‘world’s leading expert in sex therapy for honey bees’, one was an interviewer tasked with asking questions of the expert and one was the audience tasked with listening.

As you can imagine, the audience had to get creative in a hurry.

Next, he talked about how you never know what to say when you’re in the middle of an argument because your brain is essentially in overload. This is similar to when we are in the office and there is so much going on around us we often don’t have time to think and relax.

He recommended employees need ‘Google time’ aka ‘20 per cent time’ to relax and think – that non-work time is where a lot of organizations great ideas start.

He also highlighted the secret to growing and expanding on ideas is as simply as two little words: YES AND…

. @DuncanJWardle “When faced with the task of coming up with new ideas, always respond with, ‘yes and…’ Yes grows ideas, no destroys the ideas.” #hrconf2019

Far too often when new ideas come up we’re all quick to judge them and provide reasons why they will never work. Wardle calls this the “NO BECAUSE” answer. Answering this way all but guarantees the conversation dies quickly along with employee engagement shortly after.

When you respond with “YES AND” conversations and ideas grow because people feel involved in the conversation and there is encouragement to make things bigger and better than before.

Wardle concluded with the four essential traits he believe companies should be looking for in new employees. 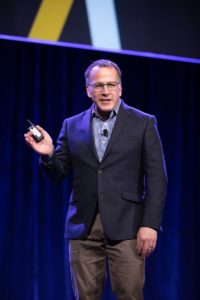 Ron Tite started off day two of the HR Conference + Tradeshow by simplifying what organizations are all about.

. @rontite “Organizations are about three words, THINK, SAY and DO.” #hrconf2019

He then elaborated on that simple message.

Do. What are the actions your organization is taking to back up its defined beliefs? The actions we take are evidence that what we believe in, is indeed, ‘what we believe in’. To drive your actions, begin by asking yourself three questions:

Tite then joke that the excuse he often hears when it comes to saying is, “But I’m not very good at telling stories.”

To that point, he joked that people often who often say they can’t tell a story suddenly become the narrator to a Hollywood blockbuster when the story is something that matters to them.

(Movie narrator voice) “It was a cold December day. I spotted him out of the corner of me eye waiting for the 9:15 bus and said to myself, ‘I must find out his name’…”

When the story matters to us, like the day we met our significant other or the day our child was born, we’re all amazing story tellers. Tell your story authentically and be comfortable with your imperfections. Imperfection makes us real. Perfection is not trusted anymore. 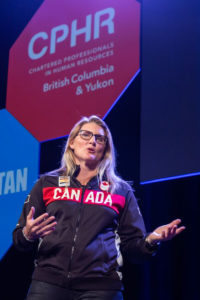 Legendary Canadian and arguably the best female hockey player to ever lace up a pair of skates, Hayley  Wickenheiser, received a standing ovation for her keynote speech over lunch on the second day of the conference.

Wickenheiser shared with the audience stories from her personal and professional life, and what she’s learned from them.

She kicked things off by sharing a story about a personal experience she recently had while going through training to become a doctor.

She was working in the ER one night and a call came in that the paramedics were bring in a 19-year-old who had just overdosed on fentanyl. Her supervisor immediately turned to her and told her to get ready because in a few minutes she would be performing CPR on the patient.

“I thought I knew what pressure was,” Wickenheiser said as she touched on all the big hockey games she had played in her career. “But the pressure I felt when you’re trying to save someone’s life was nothing that I had ever felt before.”

Having a son who was about the same age really hit home for Wickenheiser and drove home the key takeaway from her speech.

. @wick_22 “We’re so busy right now that it seems like from time to time we forget what’s really important….we need to remember the people around us are what’s important” #hrconf2019

After that, she touched on the best advice she’d received in her hockey career.

After losing the 1998 Olympic Gold Medal to the Americans in Nagano, Japan, her coach gave her advice she still carries with her to this very day.

He told her, “A Gold medal is a wonderful thing, but if you’re not enough without it, you’ll never be enough with it”.

In closing, Wickenheiser offered the audience these three tips she had learned from hockey: 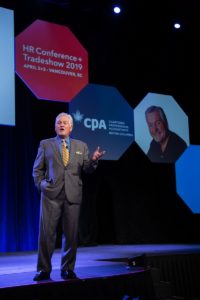 Closing out the HR Conference + Tradeshow was the always friendly and approachable Steve Gilliland with his keynote speech titled, Hide Your Goat.

Using his own brand of humour, Gilliand took the audience through a series of stories that all centred around a common theme.

In order to “hide your goat”, first you have to train your goat. And by goat, he means things that get you upset, such as:

On the topic of co-workers, Gilliland learned a lot of lessons from his, now famous, secretary Margaret. Someone who still to this very day he calls the best leader he’s ever been around.

“Leadership is about influence,” said Gilliland as he recalled the time Margaret bit off a man’s head for referring to her as ‘just a secretary’. “Margaret wasn’t ‘Just’ a secretary. No one is ‘just a ???’. People are more then their title.”

Margaret also passed along some great advice. Prepare hard and finishing is easy.

Next time when something isn’t going the way you want it to go or someone is bugging you don’t say, “It is what it is”. No, the situation is what you make of it.

Check out the CPHR BC & Yukon Facebook Page for photos. 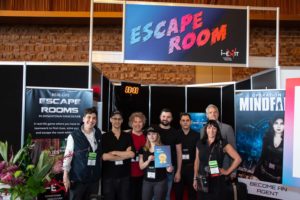 There were several memorable vendors who took part in the tradeshow, but one stood out from the rest as the “Best Booth”. The i-Exit Vancouver escape room took that honour with their two room set-up. One room challenged people to solve a series of puzzles in order to escape, and the other used artificial reality similar to Pokémon Go to find out how someone died.

Other popular booths were:

Award of Excellence – HR Professional of the Year

Full bios on the winners can be found HERE. 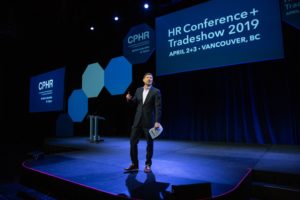 CPHR BC & Yukon would like to thank the following:

Thank you Roger Haskett for the energy, enthusiasm and professionalism you brought to the emcee role.

Thank you to the five exceptional keynote speakers, Mel Robbins, Duncan Wardle, Ron Tite, Hayley Wickenheiser and Steve Gilliland for sharing your personal stories and the lessons you have learned through your experiences.

Thank you to the 40+ breakout session speakers for passing along your knowledge and expertise to the delegates.

Thank you to the Indeed Smart Stage presenters for taking the time out of your busy schedules to present at the tradeshow. Your passion for the HR profession and your topics were infectious.

Thank you to Susan Ryan, Chair, and the CHPHR BC & Yukon Board of Directors for the time you have given up out of your busy schedules and your support over the years. It was great to see so many of you in attendance.

Thank you to Conference Chair, Cindy Dopson, and the rest of the Conference Organizing Committee for the countless hours of your time you have given up over the past year to help 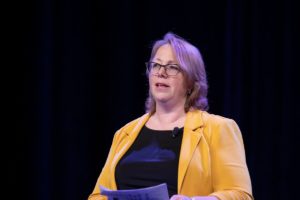 shape the conference into what we saw over the two days.

Thank you to our volunteers for the outstanding work you all accomplished throughout the past few days. From stuffing delegate bags, to checking coats, to guiding people to the correct session, to the countless other tasks, to being that smiling face greeting people – the volunteers truly were awesome. We could not have done what we did without you. THANK YOU.

Thank you to our sponsors and tradeshow exhibitors for your support of the event. Again, we couldn’t have done it without you.

Thank you to the more than 1,100 delegates who gave up their time and took in the two days of learning and networking. We hope the HR Conference + Tradeshow was everything you were hoping for and more.

Thank you to the Vancouver Convention Centre for providing the perfect setting for the HR Conference + Tradeshow. Your staff was amazing, thoughtful and helpful throughout the planning process and the event.

Thank you to Levy Show Service for all your help leading up to the event. From setting up the tradeshow, to building the CPHR BC & Yukon booth, to providing tables and stools – you truly do specialize in customer service, event decorating and custom exhibit design. 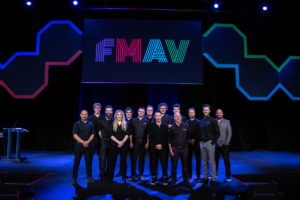 And last but certainly not least,  thank you to FMAV for all your help in transforming the main ballroom and the breakout rooms into something special each and every year. As always, your staff was amazing to work with and the way you transformed an empty ballroom into an “HR Rock Show” was amazing. We truly are both lucky and grateful to have worked with you again this year.

For more info on the sponsors, we encourage you to check out their websites.