Professional careers have always had a tinge of uncertainty; however, the digital age has amplified it significantly with efficiency no longer being the mainstay of human excellence as advanced automation and seamless autonomous functioning removing the committing of errors from the corporate equation.

Consequently, excellence is being commoditized with respect to job performance and the notion of being ‘relevant’ in the digital world is gaining more traction.

More and more of the repetitive/physically demanding/minimally diverse jobs/roles/functions are being relegated to smart machines while cerebrally-intensive skills — e.g., innovative thinking, astute strategizing, creative application, cohesive peer-to-peer engagement, etc. — are being heralded as the last bastion of human relevance in the workplace. Most of the respective impact is being felt by the mid-career professionals who are haunted by the notion that “45” is the new “65” as they brace for the technologies further nullify the need for large workforces.

But despite the advances in artificial intelligence (AI) painting a somewhat dim picture, there is hope.

The Redefinition of Human Value in a AI Workplace

Additionally, the list of professions that used to be the exclusive domain of human dexterity is dwindling, while the “fantasized fiction” of humans working with AI-enabled entities as “team members” is rapidly becoming a grounded reality. This is forcing a proactive rethink of HR policies/processes/procedures to accommodate the “new normal” before it pervades the corporate landscape — with leadership seeking robust solutions to manage unforeseen and/or unrealized situations.

Furthermore, as AI gains presence in the workplace, the nature of corporate life is increasingly evolving from inherently business to humanistic. Therefore, it becomes incumbent on progressive organizations to muster the courage and honesty to redefine/adjust the career paths and communicate the actual progression prospects to their workforce in advance. This holds particularly true for professionals who face the stark reality of redundancy due to the irrelevance/marginalization of their skill sets in the foreseeable future.

Regions of Self-Belief and Self-Doubt 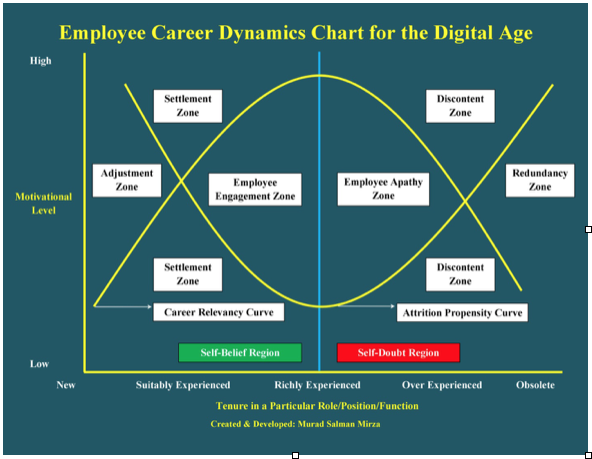 This chart provides an overview of how motivational levels play a significant part during the tenure of a professional in a particular role/function/position with respect to career relevancy and attrition propensity considerations. It is divided into two main regions, i.e., the Self-Belief region and the Self-Doubt region.

The Self-Belief Region reflects the optimistic proclivity of a professional who is intrinsically motivated and perpetually driven to excel at his/her role/position/function as he/she prevails/succeeds in overcoming the associated challenges with infectious zeal. He/she is also the type of professional that the organizations like to project as their brand ambassador, especially, to entice the new crop of desired talent.

The Self-Doubt Region reflects the pessimistic inclination of a professional who feels betrayed in terms of the ‘broken’ psychological contract — e.g., marginalized/overlooked for career advancement opportunities, victimized by organizational politics, ignored for high-profile assignments, etc. — and is nagged by the urge to seek better career prospects with another reliable organization, while dreading the increasing probability of becoming obsolete and/or being pushed out as a misfit by the current employer.

The two main regions are divided into six zones:

This refers to the area where the professional is in the process of getting oriented to the new role/position/function. He/she is generally motivated and excited to embrace the relevant responsibilities and keenly observes how to initiate/develop productive relationships with his/her peers and supervisor(s). At the same time, he/she is also very sensitive to performance criticism and disparaging remarks/behavior from peers/supervisor(s) that can lead to his/her questioning the decision to serve in the respective role/position/function and may result in an early exit. Therefore, it is critical for the team, especially, the supervisor(s) to ensure that he/she is on-boarded effectively and given the confidence of being a valued team member in conjunction with the HR/talent management function.

This refers to the area where the professional starts to own the role/position/function after having a successful on-boarding experience and takes solid steps for establishing his/her own reputation as a worthwhile investment in the respective capacity. It also reflects the comfort level that seeps into the professional’s mindset as he/she sheds off any concern about being a failure at performing his/her assigned tasks/responsibilities and gains appreciable amounts of intrinsic motivation to create a solid foundation for excellence. This also creates a buffer against any negative thoughts/experiences that may entice the respective professional to leave due to any expected impediments, e.g., organizational politics, peer jealousy, long work hours, etc.

This refers to the area where the professional has attained an appreciable level of proficiency in his/her assigned role/position/function and is galvanized by an empowering corporate culture to go beyond the call of duty to facilitate/assist/help anyone in his/her sphere of engagement, e.g., customers, clients, peers, supervisor(s), mentees, etc. Such professionals are the true assets for the corporate entities and are often profiled/praised/heralded as worthy ambassadors in terms of being the embodiment of core values espoused by the organization. They are the hardest to poach by competitors and often consider extravagant recognition and associated financial rewards secondary to the attainment of personal gratification achieved from selfless application of inherent talent nurtured by the raw and honest gratitude of recipients.

This refers to the area where the professional realizes that his/her outstanding performance is not yielding career development and growth opportunities, while his/her peers with considerably less capability are able to surge ahead with promising and high-visibility assignments due to favouritism/nepotism/other non-performance factors. Such a perception of blatant impropriety places the respective professional in a self-reflective mode where he/she assesses the fruitlessness of the value of his/her profound contributions/considerable achievements and steadily gains an indifferent attitude that often manifests in low morale, loss of drive, going by the book work preference, mood fluctuations, etc. Consequently, the high motivation to do great professional work at the present organization converts into the high motivation for finding great career opportunity at another organization before the ‘margin of appropriateness/relevance/usefulness’, e.g., due to over experience, runs out in the chosen field.

This refers to the area where the professional feels that he/she has no/minimal hope of advancing up the career ladder since most of his peers have either left or advanced to higher levels of the organizational hierarchy fairly/unfairly. Additionally, he/she may also start to get informal signals from his/her supervisor(s) and/or the HR/talent management function about the slim prospects of his prolonged stay in the organization. Consequently, the motivation to leave the organization where he/she is not valued increases substantially while often harbouring a sense of betrayal due to the apparent lack of respect for serving a long time with the organization. This simmering bitterness coupled with the pulsating anxiety associated with finding suitable new employment converts such professionals into active billboards of organizational disharmony/malfunction while jeopardizing Employer Branding initiatives.

This refers to the area where the professional has lost the interest and drive to contribute in any value-added way to the organization and is considered a burden, rather than, a worthwhile investment for the organization. Keeping him/her within the corporate ranks endangers the sanctity of a vibrant and cohesive corporate culture that binds the organizational fabric robustly. Consequently, the HR/talent management function is often deputized by senior management to ensure the release of such professionals with minimal disturbance to organizational functioning, unless, they can leave on their own accord, e.g., upon finding suitable employment elsewhere. This is the least favorable option for progressive organizations that pride themselves on maintaining close contacts with their former employees, especially, in terms of leveraging their ‘employee experience’ to reinforce Employer Branding initiatives.

Organizations are generally coded to value the performance of employees more than the employees themselves. Employees are generally inclined to value their career more than the wider organizational imperatives. Consequently, while the corporate emphasis is on maximizing desired gains from employees as long as their marginal utility is deemed favourable; the priority of employees is to extract maximum individual concessions to justify continued allegiance to the organization.

Thus, the vibrancy of a productive employment relationship is normally defined by a delicate balance of conflicting interests that is predicated on the robustness of shared values and the formal/informal ‘comforting signals’ received and registered on each side.

In this light, the ‘Employee Career Dynamics Chart for the Digital Age’ serves as a common language for a healthy dialogue and as a catalyst for subsequent effective measures to reinforce the employment bonds and build the resilience that can reliably withstand the ongoing change in an era of ubiquitous AI.

Murad Salman Mirza is an innovative thinker and an astute practitioner of areas within and associated with the fields of organizational development, talent management and business transformation. He has lived, studied and served in different regions of the world, including the US, Australia, South Asia and the Middle East. Murad has more than 15 years of multi-disciplinary experience and has rich exposure to multiple sectors within the corporate world. Currently, he is engaged as a board member with two US-based organizations. His LinkedIn profile can be viewed at: Murad Salman Mirza.